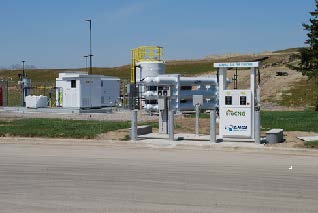 Riverview Land Preserve is currently fueling two demo vehicles with the R-CNG derived from its landfill. They estimate that by the end of the year at least four vehicles will be powered by R-CNG

Two demo vehicles are currently fueled by R-CNG and the City of Riverview has plans to convert several more municipally-owned cars and trucks to run on R-CNG.

Riverview Land Preserve is currently applying for grants but has not been approved yet. Production incentives include the Renewable Fuel Standard (RFS) Reporting Program in which Riverview Land Preserve reports its Renewable Identification Numbers (RINs). The RFS is a program under the Energy Policy Act of 2005 that authorizes the EPA to set annual quotas for the percentage of biofuel blended into motor vehicle fuels. Furthermore, as the City of Riverview acquires more CNG powered fleet vehicles the financial savings associated with the cost of R-CNG fuel will increase.