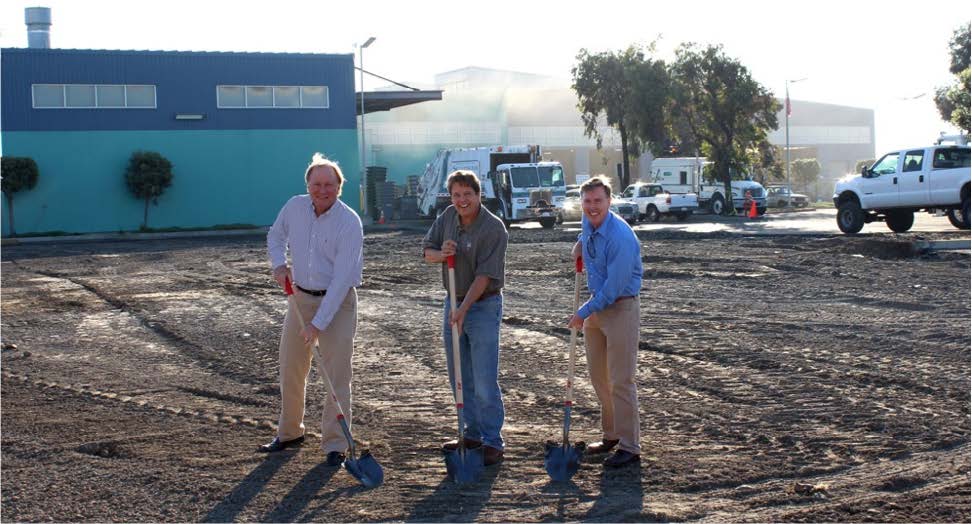 Food scraps and other organic waste

Located in South San Francisco, the Blue Line Biogenic CNG Facility is a joint effort by Blue Line Transfer Inc., a disposal and recycling facility, South San Francisco Scavenger Co., Inc., a waste management company, and Zero Waste Energy, LLC. It houses 8 of Zero Waste Energy’s patented SMARTFERM dry, thermophilic anaerobic digesters — specialized tanks that use bacteria in an oxygen-­‐free, 125-­‐131°F environment to convert organic waste to biogas, a mixture of primarily methane and carbon dioxide. A portion of this biogas is used to heat and power the facility itself, and the remainder is refined into renewable natural gas (RNG) using BioCNG, LLC’s proprietary biogas upgrading technology, which removes the carbon dioxide, water, and other impurities leaving a 97% pure stream of methane. Once compressed, this renewable form of natural gas fuels 10-­‐12 of Blue Line Transfer’s refuse collection natural gas (CNG) vehicles, displacing 120,000 gallons of diesel annually. Each of the refuse collection vehicles is able to collect enough organic waste in one route to fuel it for an entire day, creating a closed-loop system.

Construction on the facility began in October 2013 and was completed in spring 2015. The plant has the capacity to process 11,200 tons of food and other organic waste annually, diverting 95% of what would otherwise end up in landfills and generating 5,000 tons of organically-­‐certified compost from digestate — the residual material from the digestion process. As a near-­‐carbon-­‐neutral — or even carbon negative — process, the conversion of food scraps and other organic waste to renewable compressed natural gas (R-­‐CNG) via anaerobic digestion will help California meet the goals of Assembly Bill 32 (AB 32), under which the state’s Air Resources Board requires that by 2020, greenhouse gas emission levels either match or be lower than those from 1990.

The project was awarded a $2.6 million grant through the California Energy Commission’s (CEC) Alternative and Renewable Fuel and Vehicle Technology Program. Funded by surcharges on vehicle and boating registrations, and smog check and license plate fees, the program allocates approximately $100 million a year towards the development and deployment of low-­‐carbon alternative fuels and advanced vehicle technologies. From this allocation, $20 million is for the production of alternative fuels such as RNG.