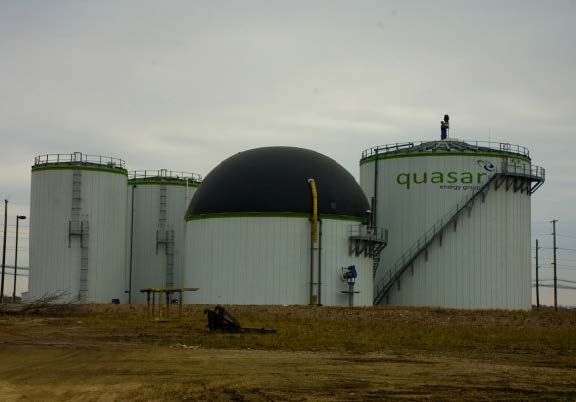 Through the collaboration of quasar energy, Kurtz Bros. and the Solid Waste Authority of Central Ohio (SWACO), a large-scale facility has been constructed outside Columbus, Ohio, to convert bio-solids (from wastewater treatment), food and beverage waste, and fats, oils and greases (FOG) to biogas and R-CNG for use as electricity and vehicle fuel respectively. The facility utilizes Ohio-based quasar energy’s ecoCITY System 1325, patented technology comprised primarily of a large anaerobic digester adjacent to waste storage tanks, which combine to turn approximately 50,000 wet tons of waste (annually) into enough electricity to power 750 homes, and R-CNG to fuel a local municipal fleet. The remnants of the conversion process will be used, distributed or sold by Kurtz Bros., Inc., a local leading resource management company specializing in recycled lawn and garden products. The Columbus plant is one of four operational digesters (and four more under construction) designed and built by quasar, with a long-term focus on using RNG as vehicle fuel.

State funds, dedicated to alternative energy and green job creation projects, made available to quasar accounted for a large portion of the total facility construction costs. A small grant was also given to Kurtz Bros. from the Ohio Department of Natural Resources to help purchase organic waste recycling equipment. The facility expects to create and sustain, directly and indirectly, more than 20 jobs.